Twenty-eight year old Katrina Jaitley is rebuilding her life after escaping an abusive boyfriend. The last thing she needs is the mystery she stumbles on during a bout of retail therapy. But she can’t ignore the coil of film — a piece of movie history — she finds hidden inside her purchase. Unfortunately, Peter, the handsome host of the estate sale, disappears before Kat has a chance to return it to him. Curious, Kat watches the strip and is shocked to witness the brutal murder of a famous 1920’s silent film star by a fellow actor. When a news article cites Kat as the film’s owner, her already complicated life goes from bad to worse. Someone begins stalking her. Are they trying to silence her or what she has discovered?

As a minor help to keep you from bouncing off your walls, The Silent Treatment is now available for $0 until the bookstores open again. Enjoy this slice of “the before times.”

The Silent Treatment was published in 2015 with Booktrope Publishing. When 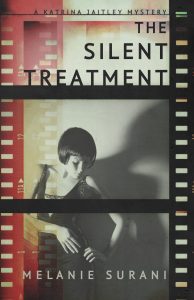 they went out of business, they left this book without a home.

This book was supposed to be the first in a series (or a trilogy) starring Kat Jaitley. While I did write two other installments, because I started this series in 2008 (with NaNoWriMo), I’m in a different place now than when I started. I won’t say those books won’t be released, but I don’t actually know. Let me know if it’s something you’d want to see.